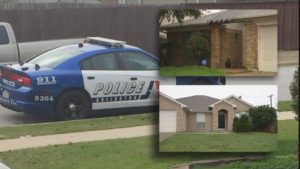 Sally Tackett thought she found the perfect house in Arlington in the right neighborhood and at the right price.

Tackett really needed a break after, according to the police report she filed, she had just gotten scammed on a different house for rent.

“We were doing everything by text and email,” she said.

Despite her accepted rental application paid deposit, Tackett never got to move into the first rent home. After sending her deposit, she says the man who said he was the owner sent a fake UPS email saying he sent the keys. They never arrived.

After Tackett was out more than $1,000, she started her search for a rent home again. After finding a house on Craigslist, she thought it was another home run.

This time, Tackett thought she’d better be careful. She insisted the landlord let her inside before any money changed hands.

“He sent us the code to the lockbox to get in the house. He knew exactly where the keys are and everything,” she said.

He even talked with Tackett on the phone as she toured the place with her wife. They knew him only as ‘David.’

For Tackett, it was a perfect house. For David, it was a tough time.

“He said he was in Houston, and he had a son in the hospital dying from cancer,” Tackett said. “And that’s why he was doing everything by text and email.”

All the pieces were there. David had all the right answers. At one point, Tackett had to ease his concerns that they were good tenants.

After a one-year lease was signed and rent was paid through a mobile pay site, Tackett moved in. Then, a knock came at the door a few days later.